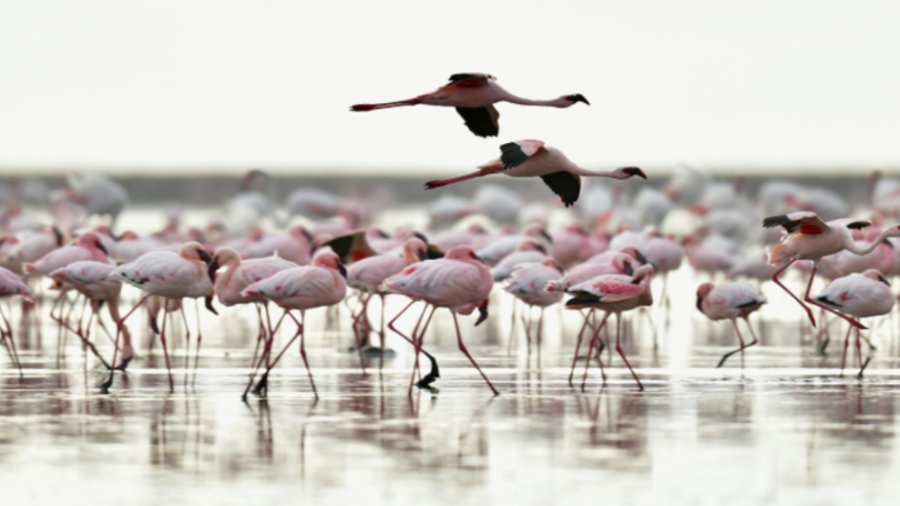 Lake Natron is situated in northern Tanzania on the border with Kenya, close to the Serengeti National Park and the Ngorongoro Conservation Area.

The lake is in the vicinity of Ol Doinyo Lengai, which is visible on the southern part. Lake Natron covers an area 56 km (35 miles) long and 24 km (15 miles) wide but the water level changes due to evaporation. The shallow and alkaline lake has different springs, the Ewaso Ng'iro River and different hot springs. The surface of Lake Natron, which has high salt, magnesite and sodium carbonate concentration, is covered with a pinkish-white soda crust.

The area around the lake offers different attractions such as a large number of volcanic implosion craters, numerous waterfalls and ravines with nesting places for Rüppell's Griffon Vultures. Among the most prominent attractions of Lake Natron is the Gelai Volcano, a 2,942 m (9,652 feet) high volcano in the southeastern part, and the archeological site of Peninj, where archeologists discovered the Peninj Mandible – the fossilized teeth of Australopithecus boisei.

Some of the activities at Lake Natron are swimming, a visit to Maasai boma or a simple trek to the Ngorongoro Crater Highlands with numerous craters.

The area has a beautiful wildlife

The lake is a breeding place for thousands of Rift Valley Flamingos. They build their nests using the soda flats between August and October. The flamingos of lake Natron feed with the lakes Spirulina algae. Because the flamingos use this area for breeding the lake and its surrounding is under the International concern for preservation. Other animals which inhabit this area are zebra, ostrich, fringed eared oryx, gazelle, gerenuk, lesser kudu and golden jackal.

Lake Natron is situated in northern Tanzania on the border with Kenya, close to the Serengeti National Park and the Ngorongoro Conservation Area. The lake is in the vicinity of Ol Doinyo Lengai, which is visible on the southern part. Lake Natron covers an area 56 km (35 miles) long and 24 km (15 miles) wide but the water level changes due to evaporation.

Enquire now
Let’s learn Swahili for your safari!
Jambo! (Swahili for “hello!”) Quick quiz: Do you know how to say “have a good day” in Swahili? What is Swahili for “good morning”? What is “how are you” in Swahili? Speak to people in East Africa in their native language, and they will surely give you a Swahili thank...
Read more...
Safari Lunches, Packed with Flavor
“Safari lunchbox” has become a bit of a dirty word on the safari scene. Every good lodge cares about their travelers, and tries their hardest to create interesting meals for safari-goers, but it’s hard to avoid a bit of repetition out on the trail. Shadows Of Africa has a very...
Read more...
Tanzania Safari Routes Distances
Tanzania, our incredible home, is always open for travelers! We can’t wait to share her beauty with you. Take a look below at what we have to offer: the routes, the accommodations, and the experiences. The north of Tanzania is full of incredible sights, every way you look. Most of...
Read more...
We Plant Trees. Together, Planting a Forest
Travel with us, and we plant a tree in your destination. Shadows Of Africa has partnered with One Tree Planted to maintain and restore our beloved continent. By supporting reforestation in the delicate ecosystems of our African home, we are making sure that this beautiful land will be around for...
Read more...
Our Top 5 Tips for Your Second Safari!
Recovered from your first African safari? Start getting ready for round 2! The magic of safari is this: no two safaris are ever the same. Once you’ve been on your first safari, it’s only a matter of time before you’ll be coming back for more! Trust us - we know...
Read more...