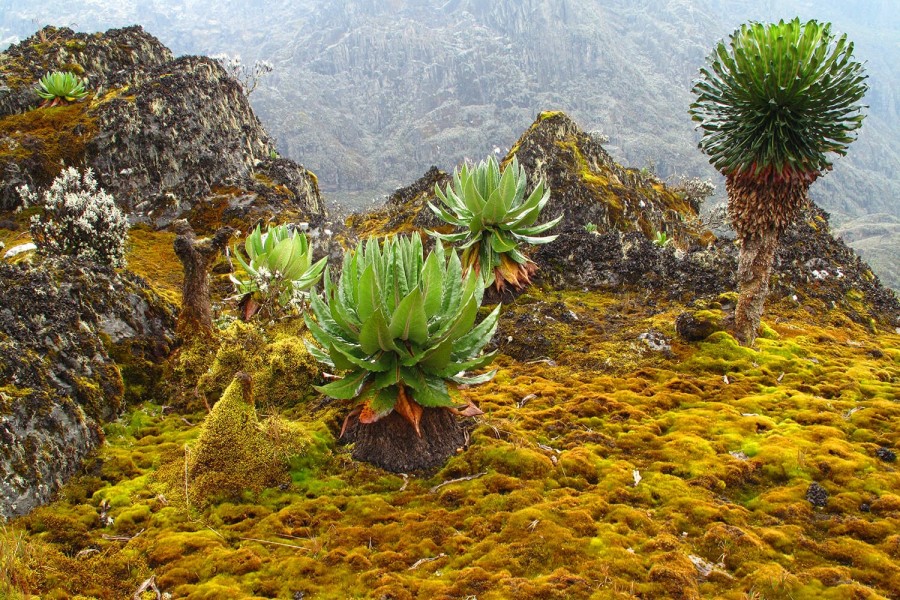 Details of Mountaineering and Hiking

Some of the best trails in Uganda

The Rwenzori mountains are a natural border between Uganda and the Democratic Republic of Congo. They are 120 km long and 65 km wide. Africa’s third-highest mountain, Mt. Stanley (5109 m) lies within. The Rwenzori mountains are also one of the only three on the continent with permanently snow-capped peaks. They were ranked the best in Africa and ninth in the world for mountain climbing and hiking adventures. The Rwenzori Mountains National Park is the prime destination for mountaineering in Uganda.

The Central Circuit, the longest trail, takes 8 days and allows you to climb to the highest peak of Margherita. Shorter trails offer also easier treks, such as the 3-day Mahoma loop, 1-day Chimpanzee trail and 1-day Kilembe trail.

Mount Elgon lies on the border with Kenya, its highest peak Wagagai (4321 m), 8th in Africa, is situated on the Ugandan side.

Diverse and constantly changing vegetation and fascinating wildlife along the slopes will make your climb unforgettable. Caves, water pools, falls, and wonderful sceneries sure add to it. There you'll also see the world's largest caldera, 50 km by 80 km big. Two major trails lead to the peaks. The Sasa trail (Budadiri trailhead, 4 days), accessible from Mbale, is the more direct way to the peaks, the Piswa trail is a gentler hike and takes 5 days.

One of Uganda's iconic attractions, the Sipi Falls, comprise three waterfalls, 85 m, 75 m and 100 m high. They lay at the foothills of Mount Elgon and are supposedly the most beautiful waterfalls in Uganda. Sipi has become very popular for day hikes. The trek to visit the three waterfalls is 7 km long and will take you around three hours.

The Virunga Mountains, which stretch along the borders of Uganda, Rwanda and the Democratic Republic of Congo, carry eight volcanoes in their bowels. The three(Sabyinyo, Gahinga, Muhavura) are located in southwestern Uganda on the border with Rwanda and the Democratic Republic of Congo. They constitute the Mgahinga Gorilla National Park. Volcanoes offer great day hikes that promise a very special experience. Mountain volcanic vegetation will accompany you along the way, you will meet many endemic species of birds and other rare wildlife. You can count to see mountain gorillas and golden monkeys here.

It starts the Virungas chain, which lies on the border between Rwanda and Uganda. A full day, quite demanding hike to the top (5 hours) will reward you first with a small volcanic crater lake at the summit that you will easily walk around and thus enjoy the magnificent views of the Virunga Mountains in all directions. The descent will also take you about 5 hours, and along the way, you will, of course, enjoy observing the flora and wildlife.

Situated between Muhavura and Sabinyo, it is the lowest of them and promises a shorter and easier hike. It is topped with a bigger volcanic crater lake which isn’t as easy to circumnavigate as the one on Muhabura.

Situated on the common border of Uganda, Rwanda and the Democratic Republic of Congo it represents the most challenging hike of the three. It offers rugged terrain with many craters, but also the best views of the Virungas. It has three peaks that look like three spaced teeth, hence the local name Sabinyo which translates “Old man’s teeth”. A hike to and fro will take you 8 to 10 hours.

Bwindi National Park has the highest population of gorillas in Uganda. There are 19 habituated gorilla families which the most in any park. A trek to Bwindi forest will be led by a park guide, and porters are available to carry your daypack (at a surcharge). After several hours of trekking through the jungle and hiking sharp hills and ridges, you will see the gorillas! The priceless reward of observing them for one hour awaits you!

You probably first thought of trekking, where you’ll be able to see gorillas, right? It is certainly one of the most beautiful experiences that Africa has to offer but by no means the only one. Uganda offers a wide variety of landscapes and many wildlife, and we have chosen for you some of the most picturesque hiking and mountaineering tours.

Whether eastern, western, southern or northern Uganda, everywhere lies a path to walk! Many tours are available, suited to every wish. Climb the highest peak, stroll around a lake or something in-between. Take a few hours of your trip or make your trip a mountaineering experience, we surely have something for you.

Enquire now
Best Lodges in Zanzibar - Top 5!
Zanzibar is one of those special exotic places that has everything you could want in a luxury getaway. It is world-famous as a tropical island paradise, and people come from all over to witness its natural beauty and unwind with the fresh Indian Ocean breeze blowing through their hair. Even...
Read more...
Coolest Lodges in Tanzania - Top 5!
Tanzania is a huge country, almost every inch of which is filled with breathtaking nature and unique sights. From Mount Kilimanjaro to the Serengeti National Park to the gorgeous coastline - Tanzania is known worldwide for many of its natural wonders. This beautiful country is also home to an incredible...
Read more...
Tripadvisor’s Travelers’ Choice Award for 2022 goes to Shadows Of Africa!
Some exciting news! We would like to share with you an achievement that we are sincerely proud of: We once again made Tripadvisor’s Travelers’ Choice! This means that we - Shadows Of Africa - are in the top 10% of attractions worldwide on the biggest travel site on the internet...
Read more...
Tsavo: Kenya’s Greatest National Park
Have you seen Netflix’s Our Great National Parks series yet? Are you feeling inspired by the episode featuring Kenya’s incredible Tsavo? The biggest national park in Kenya hosts an amazing variety of animals, plants, and adventure! The new Netflix documentary series, narrated by none other than former American president Barack...
Read more...
Plastic-free safari
It has long been a thorn in the side of travel agencies like us to send out safari vehicles packed with single-use plastics. Our Tanzania team has already found and implemented a solution: we have now installed refillable water canisters in our safari vehicles. We designed custom brackets to fit...
Read more...