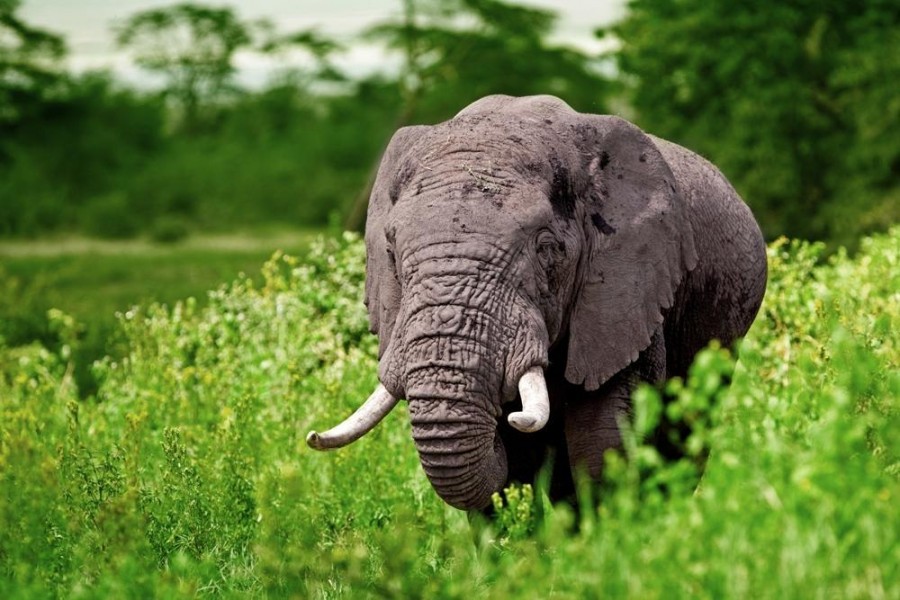 The largest living land mammal, easily identified by its long, highly mobile and sensitive trunk, very large  ears and two tusks extending from the upper jaw. It can be distinguished form the Indian elephant by its large ears, which it uses as a heath regulator.

They have grey brown skin, virtually hairless except at the tip of the  tail. They usually take the natural colouration of the soils as a result of frequent mud and dust bathing. The most fascinating feature of the elephant is its tusk and its trumpet.

The trumpet is very muscular, and can tear up a tree by its root! The trumpet has many purposes: breathing and smelling, gathering food, drinking and showering. Both sexes have tusks, which can grow up to several meters.

Elephants are often spotted in large groups of females and babies, while the males are chased away as soon as they are old enough to manage on their own. Males appear in the mating season only, the rest of the time they wander about alone or in small groups.

Females gather food and protect their babies against predators.

Food: Bulk feeder and in a day only they can consume up to 230 kg grass and 150 liters of water!

Enquire now
Let’s learn Swahili for your safari!
Jambo! (Swahili for “hello!”) Quick quiz: Do you know how to say “have a good day” in Swahili? What is Swahili for “good morning”? What is “how are you” in Swahili? Speak to people in East Africa in their native language, and they will surely give you a Swahili thank...
Read more...
Safari Lunches, Packed with Flavor
“Safari lunchbox” has become a bit of a dirty word on the safari scene. Every good lodge cares about their travelers, and tries their hardest to create interesting meals for safari-goers, but it’s hard to avoid a bit of repetition out on the trail. Shadows Of Africa has a very...
Read more...
Tanzania Safari Routes Distances
Tanzania, our incredible home, is always open for travelers! We can’t wait to share her beauty with you. Take a look below at what we have to offer: the routes, the accommodations, and the experiences. The north of Tanzania is full of incredible sights, every way you look. Most of...
Read more...
We Plant Trees. Together, Planting a Forest
Travel with us, and we plant a tree in your destination. Shadows Of Africa has partnered with One Tree Planted to maintain and restore our beloved continent. By supporting reforestation in the delicate ecosystems of our African home, we are making sure that this beautiful land will be around for...
Read more...
Our Top 5 Tips for Your Second Safari!
Recovered from your first African safari? Start getting ready for round 2! The magic of safari is this: no two safaris are ever the same. Once you’ve been on your first safari, it’s only a matter of time before you’ll be coming back for more! Trust us - we know...
Read more...