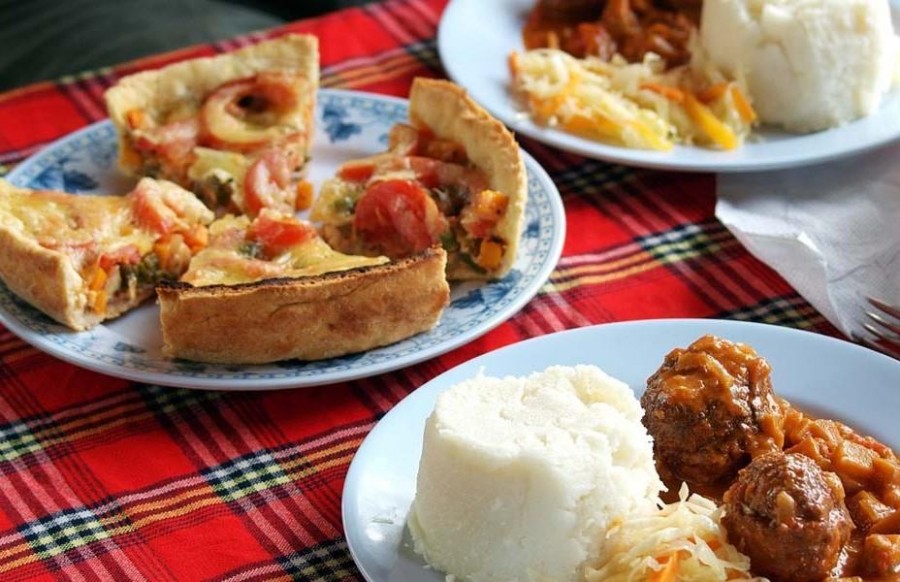 Mkuru is situated on the North side of Mount Meru. From a distance the area can be easily recognized through the remarkable shape of Ol Doinyo Landaree, the little mountain that looks like a pyramid.

Maasai families live in small traditional bomas scattered throughout the area. In the early morning, the warriors start wandering with their cattle looking for pasture and water. Young children take care of the goat and sheep, and sometimes assist their mothers in fetching water and collecting firewood. With assistance from Heifer Project International some Maasai have also started keeping camels, and come to understand the benefits of this animal. On behalf of the requests from Maasai societies Heifer Project International is providing camels to individuals and groups.

Since the introduction of camels in Tanzania in the early nineties, Mkuru has become one of the centers for camel promotion in the country. Over a hundred camels stay in the camel camp, from where they are lead every day into the plains to search for forage. At the end of the afternoon, all camels return to the camp and are milked by Maasai warriors. The area around Mkuru is alive with colorful birds.

The rufous crowned roller, the red and yellow barbet and the Fischer’s lovebird are some of the more special species. Small game also regularly passes the area and in the plains to the north, giraffes and zebras are common animals.

At the end of the afternoon you arrive at the camel camp, where you can see the camel herds returning from the plains and walk in between these animals that are very friendly to men. Often there are young camels, just born, that cannot yet walk and have to be carried by Maasai warriors to a place in the shade of a tree. At night, near the campfire, you can listen to sounds of the plains and watch the thousands of stars at the sky. In the morning you will see the Maasai milking the camels and you can enjoy the taste of a cup of fresh camel milk. The camel ride From the camel camp you can undertake a camel ride of several hours through the plains around Mkuru. On the back of the camel and guided by Maasai warriors, you can perfectly oversee the area and have good chances to view game and special birds. With Kilimanjaro and Longido Mountain at the horizon, and Mount Meru rising up right behind you, the landscape you are wandering through is of an amazing magnitude.

In co-operation with tour operators, arrangements can be made for camel safaris of more days. Starting from the camp in Mkuru, safaris are possible in the direction of Kilimanjaro, Longido Mountain and Lake Natron. In two days, a tour can be made in the direction of Mount Kilimanjaro, passing the wildlife corridor between Amboseli National Park and Tarangire and Arusha National Park. In three days a safari can be made to Longido mountain, while four days is sufficient to reach the mountain of Kitumbeine. Four the most adventurous ones, a seven days safari can be organized via the mountains of Kitumbeine and Ol Doinyo Lengai to the shores of Lake Natron. During the camel safaris you usually cover around 20 kilometres before lunch. In the afternoon you can always relax and explore the area around the camp.

Guided by Maasai warriors you can walk through the acacia woodland around the camel camp in Mkuru. With their sharp eyes, the warriors notice every movement and will show you many special birds, that live in this semi arid area. If you are lucky, you can also see some game running away. It is advised that you bring a pair of binoculars if interested in this option.

For a more strenuous tour without the camels, you can climb Ol Doinyo Landaree, the mountain with the shape of a pyramid. Escorted by Maasai warriors it will take you about two hours to reach the top, from where you have a beautiful view on Mount Meru and can look out over the Maasai plain between Meru and Kilimanjaro. In about one and a half hour you can descend the mountain and relax at the camels camp. Combinations of the various tours are very well possible.

A camel safari in Mkuru can also well be combined with a visit to Arusha National Park. In two and a half day an adventurous tour can be made around Mount Meru. The first day you leave Arusha at noon and make an afternoon Game drive in Arusha National Park around the Momela Lakes. You spend the night at Momela Lodge and make the next morning a walking safari through the natural forests on the slopes of Mount Meru. In the afternoon you proceed to the Mkuru camel camp, where you make the camel ride the next day before you return late afternoon via the west side of Mount Meru to Arusha.

Maasai families live in small traditional bomas scattered throughout the area. In the early morning, the warriors start wandering with their cattle looking for pasture and water. Young children take care of the goat and sheep, and sometimes assist their mothers in fetching water and collecting firewood.

Enquire now
Tanzania Safari Routes Distances
Tanzania, our incredible home, is always open for travelers! We can’t wait to share her beauty with you. Take a look below at what we have to offer: the routes, the accommodations, and the experiences. The north of Tanzania is full of incredible sights, every way you look. Most of...
Read more...
We Plant Trees. Together, Planting a Forest
Travel with us, and we plant a tree in your destination. Shadows Of Africa has partnered with One Tree Planted to maintain and restore our beloved continent. By supporting reforestation in the delicate ecosystems of our African home, we are making sure that this beautiful land will be around for...
Read more...
Our Top 5 Tips for Your Second Safari!
Recovered from your first African safari? Start getting ready for round 2! The magic of safari is this: no two safaris are ever the same. Once you’ve been on your first safari, it’s only a matter of time before you’ll be coming back for more! Trust us - we know...
Read more...
Six Ways an African Safari Will Change Your Life
African nature is an incredibly powerful force. It leaves a profound impression on everyone who sets foot on these lands. The pure and exhilarating natural beauty of the African landscape and all of its inhabitants is not something you easily forget. The experiences you have here will live on in...
Read more...
What Vaccinations Do I Need to Travel to Africa?
What vaccines do you need ahead of your safari adventure? We highlight the vaccines and medications you should look into ahead of your trip to Rwanda, Uganda, Kenya, or Tanzania.
Read more...